THE REPORTS HAVE BEEN GREATLY EXAGGERATED 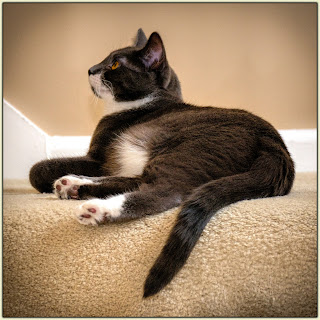 A few nights ago, as Dee and I were turning in for the evening, Edith joined us. She nestled in comfortably between us, and allowed us to give her a few skritches and ear rubs.

Edith is a sweet kitty, but she can be a bit “tetchy” - a common character trait of young cats. The slightest unexpected noise can startle her. Just how easy it is to startle her was promptly demonstrated when I released, quite without warning, a dramatic fart. Edith jumped two feet straight up in the air and proceeded to scamper under our bed at lightning speed. (I’ve observed the same result merely from scratching the bedclothes: It isn’t only farts with me, just so you know.)

I saw a similar, if not identical, reaction, from one of my fellow congregants the other day as we socialized prior to commencing our Rosh Hashanah services.

Just to interject a bit of explanation, Rosh Hashanah - the Jewish New Year - is one of those rare days on which even the most casually observant Red Sea Pedestrians will appear in synagogue. There is generally a packed house, and people will show up well prior to the start of services in order to ensure that they get (1) a good seat, and (2) a decent parking space. The first ensures that one may enjoy the proceedings without needing binoculars; the second that one need not walk more than half a mile between car and synagogue. It is a local tradition that these early birds are provided with supplies of coffee and doughnuts, perhaps to help keep them awake through the lengthy sermon. As we drink our coffee, we exchange pleasantries with people who, in many cases, we may not have seen for a year.

Thus it was that, as I prepared to descend upon the coffee-urn, I received a New Year’s greeting from a fellow congregant who was, apparently, both happy and shocked to see me.

It seems that my name is unusually similar to that of a fellow congregant - so much so that we are frequently mistaken for one another by people who do not know us well. And, sad to report, my nomenclatural doppelgänger passed away a couple of weeks ago.

When my fellow congregant had seen the announcement of the death, he called a mutual friend immediately. What happened to Elisson? I never knew he was even sick!

Nope, was the response. That wasn’t Elisson. That was Ellisohn.

But it’s one thing to get reassurance over the phone, and quite another to get visual confirmation... which explains the surprised look I got.

To paraphrase an often misquoted line from Mark Twain, the reports of my death were not so much exaggerated as they were the result of confusion. And I - keyn ayin hara - am still here!

Now: off to go startle the cat. Where da beans at?