IN WHICH I DESPOIL A SCIENCE FICTION CLASSIC

Science fiction fans will remember Frank Herbert’s 1965 novel Dune, a landmark work that eventually gave rise to a whole series of books. Herbert ended up writing six Dune novels in total, ranging in quality from “meh” to “excellent,” with none of the sequels quite measuring up to the original. (After his death, his son Brian, along with collaborator Kevin J. Anderson, would milk the property relentlessly with additional sequels and prequels.)

Dune was a rarity: a science fiction novel set in a fully realized imaginary universe, one that had a complex society, technology that was simultaneously highly advanced and yet limited in comparison with our own, and memorable characters. It cried out to be filmed, yet was so intricate as to be practically unfilmable. That did not stop people like Arthur P. Jacobs and Alejandro Jodorowsky from trying, although they never succeeded in getting a project off the ground... too damn bad, because that film would have been amazing. (Imagine Dune as envisioned by H. R. Giger. Yeah, that H. R. Giger.)

Instead, after a decade or so of Development Hell, executive producer Dino De Laurentiis hired David Lynch to write and direct his own version of Dune. At first blush, one would think that the creative mind behind films such as Eraserhead and The Elephant Man - not to mention the enigmatic television series Twin Peaks - would be just the person to bring Dune to the big screen with the appropriate creative vision. One would, alas, be wrong.

The 1984 De Laurentiis production of Dune was, to put it mildly, disappointing. The art and set design were the sole bright spots in a movie that featured weird voiceovers, huge narrative and motivational gaps, and plenty of scenery chewing. That’s too bad: the property deserved so much better.

It had its moments. Kyle MacLachlan and Sting in a knife fight! Sting wearing a glorified diaper! Mentat Piter de Vries (played by Brad Dourif with majorly bushy eyebrows, a complete 180° turn from his later, eyebrowless portrayal of Grima Wormtongue in the LOTR films) mumbling the Mentat Mantra, a glorious piece of nonsense Lynch created for the film:

Baron Harkonnen in his antigravity belt, soaring around the room and laughing like a maniac! And, of course, the bizarre Guild steersmen, so mutated by constant exposure to the melange spice that they resemble giant versions of Donovan’s Brain.

Nevertheless, some people see something salvageable in this glorious mess of a film. At least, film editor Michael Warren did. He decided to patch together the original theatrical film along with numerous deleted scenes, storyboards, and extended television footage to create what he thinks is a New and Improved Dune, which he was kind enough to upload to Vimeo.

Is it any good? Well, I just started watching it, so it’s too early to say. But one thing caught my eye, and that was some of the early footage that featured illustrations of José Ferrer in his role as the Padishah Emperor Shaddam IV. Why, that face and uniform looked sorta... familiar! 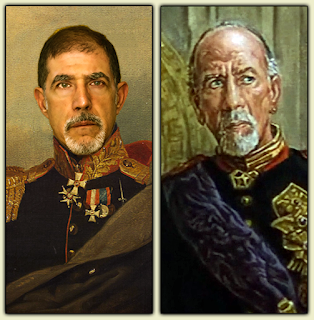 General Elisson and the Padishah Emperor. Separated at birth?

Update: It appears that the video has been taken down, no doubt because of the spike in attention it received as a result of the Digg link. Perhaps the nice folks at Universal had some intellectual property concerns.

Oh, well. That’ll save me the three hours I would have pissed away watching the thing.