“I’m shocked, shocked to find that gambling is going on in here!” - Captain Renault, Casablanca

Phil Robertson, patriarch of the Robertson clan of Duck Dynasty fame, has been suspended from the show indefinitely by A&E based on comments he made in an interview with Drew Magary which was published in GQ.com. Comments like this: 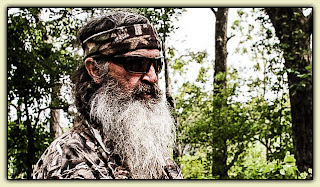 Robertson and family hail from outside Monroe, Louisiana, where the Missus, Elder Daughter, the Mistress of Sarcasm and I recently spent the night enroute back home from Texas. I was a frequent visitor to Monroe back in the days when I was employed by the Great Corporate Salt Mine, and I can tell you without much equivocation that it is not a bastion of, ahhh, progressive politics.  On the contrary, it is populated by a whole lot of people with decidedly conservative views. That Phil Robertson should speak of gays in the same breath as sheep-shtuppers and drunkards is about as surprising (to me, anyway) as the notion that the sun might rise in the east.

These views cannot have been a secret to A&E... but I suppose the issue is that Phil dropped them into an interview where they cannot be conveniently edited out, as they would no doubt have been had he voiced them during the shooting of a Duck Dynasty episode. It is a bit disingenuous for a television network to take a family of rednecks (albeit rednecks with more money than Gawd) and trot them out in front of the American public in the context of a reality show and expect people to believe they are something other than what they are.

Me, I’m not a big fan of shows like Duck Dynasty and Honey Boo-Boo. With the former, you can at least pretend you give a crap about the Robertson family - who have managed to become very successful entrepreneurs - but both smack of the same cringeworthy “Let’s make fun of these Country People” mentality. OK, Honey Boo-Boo and her family may indeed be worthy of ridicule, but still, there’s something patronizing about these Redneck Reality Shows that sticks in my craw.

Look, Phil is entitled to his views on religion and sin, and he is free to speak them at will despite the fact that I disagree with most of ’em. (The Bible that condemns male homosexuality as an “abomination” likewise considers the eating of swine’s flesh an abomination, yet I don’t see these folks rushing to avoid their bacon or country ham. Just sayin’.) At the same time, the good folks at A&E are free to fire Phil at their whim if they feel that his expressing those views might negatively affect their business interests: It’s their call. But they’re the ones who put Phil and his family on the Teevee Pedestal to begin with - teed them up, so to speak- so a little more forbearance on their part wouldn’t have been out of place.

But I do have a Modest Proposal.

I think somebody should create a new reality show featuring an entrepreneurial family - one that has made its fortune in the Marital Aids industry. You could call it Dick Dynasty.

Just a question, because you are more of a scholar than I will ever be: The dietary restrictions in Leviticus specifically refer to uncleanliness; indeed, eating pork several thousand years ago was probably a death sentence to many. In the modern world, while swine might be considered to be traditionally unclean, the actual truth is that eating pork is just as healthy (in the sense of undiseased) as anything else. So technology has changed the nature of "Uncleanliness" of pork. The argument can easily be made that The Lord was protecting the Nation of Israel from eating foods that were pure poison because they were, in fact, unclean, that uncleanliness directly affecting the health of the Israelites.

Sodomy was not considered "Unclean" though, it was considered "Detestable" I don't read Hebrew so I rely on others for translation, all apologies if I have this wrong.

I hear the argument that you have made- bacon vs homosexuality- all the time. And yet it is clear that bacon no longer holds the health issues it once did because of advances in technology and animal husbandry that are clearly inspired by The Lord. Is there some similar advance in science/technology/whatever that has allowed sodomy to no longer be detestable to The Lord?

I'm not trying to be a smartass. I just don't understand this argument at all. It further doesn't make sense in the regard of "Well, you eat bacon so go ahead and commit sodomy and marry a mamzer" if you decide to ignore one Mitzvot it's ok to ignore the rest then too? I loves me some bacon, but I don't see my love of bacon as a reason to go commit murder, or steal, or commit any sin. I'd love to have this discussion with you, though I'm clearly not up to your level of knowledge.

Og, this could be a long and convoluted discussion... but when I make comments about Leviticus prohibiting bacon and shellfish, I do it with tongue in cheek - at least partially. Non-Jews are not expected to follow the commandments, except for the Noahide ones like those prohibiting idolatry, murder, eating a limb torn from a living creature, et al. So if you want to eat bacon, feel free. No harm, no foul.

Religious Jews will tell you that the Biblical dietary laws, while possibly having health benefits, are to be followed because they are God's rules - no other rationale is necessary, and despite advances in technology and medicine, these laws have not been superseded. At the very least, following the laws of kashrut tends to keep your community isolated and is a way to draw lines between "us" and "them," which is probably the real purpose behind their promulgation.

I guess my point is, you can use the Bible - or religion - to justify or to condemn a lot of different kinds of behavior... and people tend to take a Chinese menu kind of approach to deciding what rules to follow and which to ignore.

Incidentally, there's nothing in the Bible that forbids female homosexuality - only the male version.

Thanks for the thoughtful question/comment. I appreciate the fact that you look beneath the glib surface of some of the things I write! (Plus, you're a hell of a poet.)

Thanks for taking it at least semi seriously.

Non pedestrians, liking bacon and only owning one refrigerator, have difficulty seeing the connection between what G-d said was unclean and what G-d says is "Detestable". Rambam- and I know he is often unclear, at least to me- seems to be saying "If you are starving to death, a little bacon could be a good thing" (I'm paraphrasing, of course) he also seems to direct us toward dietary restrictions as intended to be healthful. In fact through Jewish writing I see "Saving of a life is more important than kashrut, if you can't find a goat eat a pig" but nowhere do I find a single phrase that says "If you can't get some pussy, an asshole will do in a pinch, go ahead!"

Personally, I don't give a damn what anyone does, if I opened MY closet and let out MY skeletons, the four horsemen would run in terror. What I object to- and everyone who loves freedom should object to it- is the rewriting of the rules to accommodate a vanishingly small portion of the population, at the eventual expense of the faithful of Christianity- and, for that matter, Judaism. That the Muslims don't like it is a foregone conclusion. While I am no particular fan of Rick Warren, his comments on the subject encapsulate the perfection of logical thought. Our culture has, indeed, accepted two huge lies.

And I wouldn't style myself a poet. A rhymester, perhaps. But thanks, it's high praise from you. We should have another slam, but for me always getting sucked into something else every time we try.

FWIW, Mr. Robertson was quoting (or close to) from the New Testament, 1 Corinth. 6:9-10. Translation is a problem here as always, but in any case Mr. Robertson was relying on the Christian Bible as he knows it. I doubt he spends his evenings reading ancient Greek.

A&E claims to be worried about the delicate feelings of their employees, not their viewers, which seems stupid. But who knows how Duck Dynasty qualifies as "Arts & Entertainment" in the first place, nor how most of what is on the Learning and History qualifies there. Maybe A&E is looking for a pseudo-plausible escape clause in this case.